The Legacy of the Red Poppy: the Poet, Mailman and Volunteer 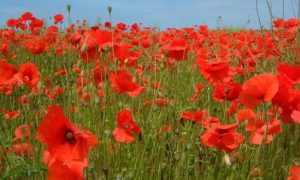 In what was just to be thought a description of the scene before them, came to be a remembrance that many take part in each Memorial Day. The day before, Dr John McCrae had seen a close friend die on the battlefront of WWI. Glancing at the bombed and gnarled soil where many of the war dead had been buried; there grew the red poppies. He penned this poem the next day and as he completed it, he looked up to see Sergeant-Major Cyril Allinson and he gave it to him. Allinson was deeply touched and ended up sending it to a London magazine publisher.

In Flanders fields the poppies blow
Between the crosses, row on row,
That mark our place: and in the sky
The larks still bravely singing fly
Scarce heard amid the guns below.

We are the dead: Short days ago,
We lived, felt dawn, saw sunset glow,
Loved and were loved: and now we lie
In Flanders fields!

Take up our quarrel with the foe
To you, from failing hands, we throw
The torch: be yours to hold it high
If ye break faith with us who die,
We shall not sleep, though poppies grow
In Flanders fields

Across the sea, Monia Michaels, a University of Georgia professor, was in New York volunteering as the US was now involved in WWI. On a break, she glanced through a Ladies Home Journal magazine and saw the poem Dr. McCrae had written from the battlefront. She responded by writing her thoughts;

We cherish too the Poppy red
That grows on fields where Valor led.
It seems to signal to the skies
That blood of heroes never dies.

Monia then went to a local store and bought 25 red silk poppies and distributed them to all the YWCA volunteers and she promised to never forget, to never break faith. It’s been over 90 years and since that time, the red poppy has raised large amounts of money to help ex-servicemen and women in need of physical and mental welfare support and families of those that have given their all. Many of those were nurses, doctors and medical personnel. Today, it is especially important to help provide mental health benefits as so many of our soldiers come home with PTSD.

As I leave the grocery store where I have purchased what we will barbeque this Holiday weekend; I stop at the table outside filled with red poppies. I talk to the volunteers of the American Legion as I donate and feel tremendous gratitude as I wear my red poppy home.